The theme for Stream of Consciousness Saturday this week is: “ink.” This reminds me of the ink I used for Chinese calligraphy.

I learned Chinese calligraphy in elementary school when I was in Hong Kong.

Chinese calligraphy is considered as an art. The following are five scripts of the word DRAGON.

The shape, size, stretch, and type of hair in the brush, the color, and density of the ink, as well as the absorptive speed and surface texture of the paper, are the main physical elements influencing the result of calligraphy. The professional calligraphers use inkstick and grind the inkstick with water in the inkstone. I used bottle ink and poured the ink into the ink box with a cotton pad in it.

There are a couple ways to hold the brush. Commonly, the brush is held vertically straight gripped between the thumb and middle finger. The index finger lightly touches the upper part of the shaft of the brush (stabilizing it) while the ring and little fingers tuck under the bottom of the shaft, leaving a space inside the palm (students were told that the space should be big enough for an egg). Alternatively, the brush is held in the right hand between the thumb and the index finger. I learned to hold the brush in a common way.

The study of calligraphy includes learning the basic strokes, positioning the character, and copying exemplary works continuously, until the move becomes instinctive and the copy is perfect.

As part of the homework, I practiced the large scripts as well as copied a paragraph from the book in small scripts. I contribute my artistic appreciation to my Chinese calligraphy background. 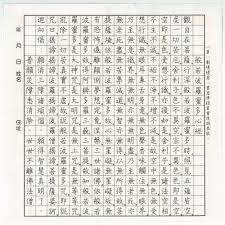