Frank’s Dutch Goes the Photo – New Bird in my Garden

I had a new visitor on June 17, 2018. It was a beautiful bird I hadn’t seen before. I was fascinated by its graceful long tail which is twice as long as its body. The sharp contrast of black and white feather with an orange beak wouldn’t escape anyone’s sight.

It happened I had the patio door open to take photos of the birds feeding. It flew into my garden. I grabbed the camera and tried to be in a hidden position so I wouldn’t scare the birds away. I only had 30 seconds before it flew away.

On the same day, De Wets Wild had a post about the same bird. I almost jumped out of my seat because the information of the bird came so timely. De Wets Wild told me that its tail is beautiful in the air. It was not within my sight when it flew away.

Following my photos, I copied a photo and the information from De Wets Wild’s post. Please visit his wonderful posts about the animals in the wild. 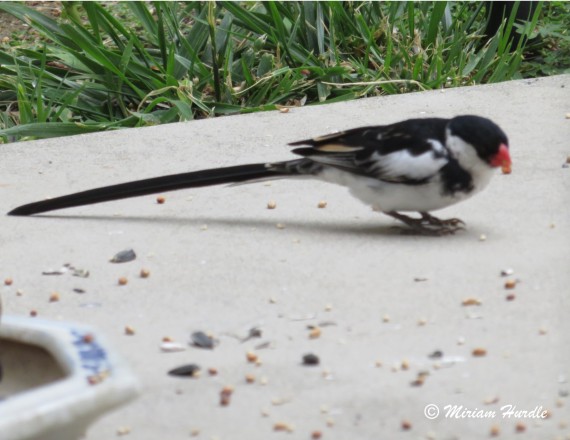 The post and one photo from De Wets Wild:

The little Pin-tailed Whydah (12cm long, without the tail, and weighing only about 15g) is most known for the aggressive nature of the breeding males, which carries tails almost double their own body length and have no qualms tackling birds many times their own weight, like doves and pigeons, over a food source or territory!

Pin-tailed Whydahs are brood parasites, meaning that the female lays her eggs (usually 1 or 2 but up to 4 at a time) in the nests of other birds, mostly small seed-eaters like waxbills, for them to raise the chicks, often after removing some or all of the host birds’ eggs. A single Pin-tailed Whydah female may lay up to 25 eggs in a season. Their breeding season stretches from spring to autumn. Males are polygamous and highly territorial. The chicks hatch after about 11 days of incubation and leave the nest at about 3 weeks old, staying with their host family for about another week before joining a Whydah group.

Their habitat ranges from savanna, grassland, reedbeds, and scrublands to suburban parks, orchards and gardens. They feed mostly on seeds and termites. In South Africa, they occur in all our provinces, though they’re rather sparsely distributed in the arid Northern Cape, while outside of our borders Pin-tailed Whydahs occur over most of the continent south of the Sahara. The IUCN considers the Pin-tailed Whydah to be of least concern.