It is with great honor and humility to announce that my book ‘Songs of Heartstrings – Poems of Gratitude and Beatitude‘ was chosen as the solo “Medalist Winner” in the Poetry category of the 2019 New Apple Summer eBook Awards! 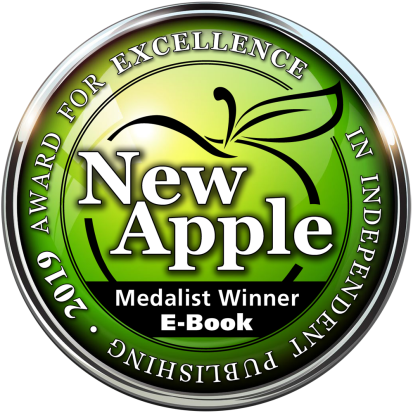 New Apple was born in 2010 to help the growing number of independent authors in the southern Ohio area find their voice. Initially the venture was a support structure of authors, educators and readers pooling their efforts to share their resources and create local grassroots campaigns. Over the last nine years New Apple has grown and is now offering comprehensive marketing solutions to the world of independent authors.
The New Apple Book Awards for Excellence in Independent Publishing were created in 2013 to provide self-published and independent authors with a chance to showcase their work. New Apple’s Annual Book Awards were established to honor the creative achievements of the unsung books fighting for their place within the publishing world. Medals and Official Selections are awarded to winners in fiction and non-fiction categories as well as E-Book categories and one designation for Audiobooks.
New Apple continues to provide resources for independent authors attempting to navigate the waters of self-publishing. In 2014, New Apple added Book Reviews and editing services as well as the introduction of tweet blasting book announcements and giveaways. In 2015, New Apple launched their summer book awards program specifically targeted toward digital books.

Leave a Reply to Smorgasbord - Variety is the Spice of Life. Cancel reply