My Book Review of Jonah by Jan Sikes.

It’s a great pleasure to share with you the inspirational short story I read over the weekend. 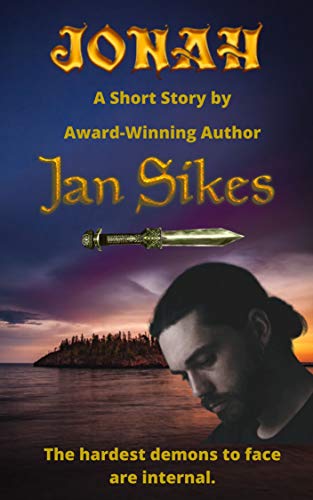 The short story Jonah by Jan Sikes reads like a spiritual journey. Jonah was in prison for his crimes committed but had a choice to be locked up in an underground box or banished in a deserted island. He chose the island. The harsh environment of the island with creatures, stinging nettles, and prickly thorns didn’t make it any easier for him. In his hut, he discovered a package with edible items and toiletry. There were two books and a pencil with a message that the only way he could get off the island was to examine himself, face the truths, and make peace with his demons.

He used to rule the city with his might, but there was no specific mention of the crimes in Jonah’s past. It’s up to the reader’s imagination. Then an unusual young boy with eyes glowed with luminescent green light and webbed fingers showed up. He wrestled with this boy, Titus, the same way he would with an enemy. Realized this boy wouldn’t do him any harm, he let him go back to the other side of the island. Overtime, he developed the friendship with Titus. Titus brought him food and kept him company. He also brought him books on the requirements of him to be set free. His response was to comply with the rules with his behaviors. Titus indicated that it was not the fake behaviors but the heart that count. His empathy and care toward Titus grew and wanted to help him get out of the environment where the people didn’t treat him right. Every time his innate passion and selflessness grew, his hut became bigger.

The story came to a surprised ending when it was least expected of Jonah. I like this story when the author skillfully depicted the inner struggle of Jonah and his capability of changing his heart. His sincerity and genuine compassion toward Titus set him free. This short story is an enjoyable read. Highly recommended.

Multi-Award winning author, Jan Sikes, began her writing career as a young girl. Her first work was a gospel song. She had an uncle whom she loved dearly, but he was an alcoholic and his drinking caused such family discord that at times, resulted in him being banished from their home. So, she wrote a song about Uncle Luke finding Jesus. That is her first memory of feeling the passion deep down to her toes for writing and for music.

When her husband passed away in 2009, she thought someone would come along and write the story of his unique and inspiring life. She awoke one morning to realize she was the only one who could write it, since she was the only one there with him through it all. So, she took several Creative Writing courses at local community colleges and went to work.

Her books are true stories about the journey of two people moving through adversity in order to grow and learn to become better humans. She believes with all her heart there is something worthy of sharing in these stories. Bits and pieces of wisdom, hard-learned lessons and above and beyond all, love…True love that you read about in fiction stories and yet this is truth. The old saying that truth is stranger than fiction fits these stories.

Jan has also developed several writing workshops that you can get more information about on her website.

She is widowed, lives in North Texas, volunteers at music festivals, has five incredible grandchildren and serves on the Board of Directors for the Texas Authors Institute of History, The North Texas Book Festival and the Texas Musicians Museum.