It is with great honor and humility to announce that my book ‘Songs of Heartstrings – Poems of Gratitude and Beatitude‘ was chosen as the solo “Medalist Winner” in the Poetry category of the 2019 New Apple Summer eBook Awards!

New Apple was born in 2010 to help the growing number of independent authors in the southern Ohio area find their voice. Initially the venture was a support structure of authors, educators and readers pooling their efforts to share their resources and create local grassroots campaigns. Over the last nine years New Apple has grown and is now offering comprehensive marketing solutions to the world of independent authors.
The New Apple Book Awards for Excellence in Independent Publishing were created in 2013 to provide self-published and independent authors with a chance to showcase their work. New Apple’s Annual Book Awards were established to honor the creative achievements of the unsung books fighting for their place within the publishing world. Medals and Official Selections are awarded to winners in fiction and non-fiction categories as well as E-Book categories and one designation for Audiobooks.
New Apple continues to provide resources for independent authors attempting to navigate the waters of self-publishing. In 2014, New Apple added Book Reviews and editing services as well as the introduction of tweet blasting book announcements and giveaways. In 2015, New Apple launched their summer book awards program specifically targeted toward digital books.

Here are the prizes at this stop:

There are 3 gifts for 3 Winners!

All you have to do to enter is leaving a comment below.

Why do people write poetry?

The earliest poetry is believed to have been recited or sung, used as a way of remembering oral history, genealogy, and law. Aristotle’s Poetics identified three major genres:

1) The epic poetry is the oldest poetry which is a lengthy narrative poem involving a time beyond living memory of the extraordinary doings of the extraordinary men and women. It described their dealings with the gods or other superhuman forces and gave shape to the moral universe for their descendants.

2) Lyric poetry is a formal poetry which expresses personal emotions or feelings, typically spoken in the first person. The term derives from Ancient Greek literature; the lyric was a musical accompaniment, usually on a stringed instrument known as a lyre.

3) Dramatic poetry or Verse drama is any drama written as verse to be spoken; another possible general term is the poetic drama. For a very long period, the verse drama was the dominant form of drama in Europe. Greek tragedy and Racine’s plays are written in verse, as is almost all of Shakespeare’s drama.

During the 20th-century and 21st-century there are disputes among the traditional forms and structures for poetry and the distinction between poetry and prose. The elements of traditional poetry include prosody, rhythm, meter, metrical patterns and rhyme. The forms of poetry comprise lines, patterns and rhyme. Prose is a natural flow of speech. However, as T. S. Eliot noted, whereas “the distinction between verse and prose is clear, the distinction between poetry and prose is obscure.” Free verse is an open form of poetry. It does not use consistent patterns, rhyme, or any musical pattern. It follows the rhythm of natural speech. Most free verse maintains the poetic convention of the poetic lines. T. S. Eliot wrote, “No verse is free for the man who wants to do a good job.”

My favorite lyrics are from hymns and songs. This is one of the songs with the lyrics based on Psalm 8.

Most of the poems in my poetry collection are in free verse. I also write in various poem forms. Here are some examples of poem forms included in the book.

Travel on a long journey found not in vain

The road taken was not one I had chosen

Unexpected trails and body half frozen

Trotting in darkness with heavy feet

Hope, my only strength to pick up the beat

Long hall of darkness with pain in veins

Comforting in the heart stopped me from fainting

The highly structured Villanelle is a 19-line poem with two repeating rhymes and two refrains. The form is made up of five tercets followed by a quatrain. The first and third lines of the opening tercet are repeated alternately in the last lines of the succeeding stanzas; then in the final stanza, the refrain serves as the poem’s two concluding lines.

Whispering into my ear

Of passionate words to hear

Needing me in your life

Day after day, night after night

Embracing me against your chest

Reassuring me for worst or best

It’s delighted to see the marvelous review of my poetry book from James J Cudney IV. He walked along side with me to recount my journey experience, my reflection on what it meant to endure and trust the process.
Please head over to his blog to read his review and over 900 of his book reviews. You’ll also find out more of his mystery books.

Stevie Turner promoted my book on her wonderful blog. She offers Drop and Run on Fridays when you leave a link of your post on her blog. Bloggers share and visit each other. Please head over to visit her blog and her books. 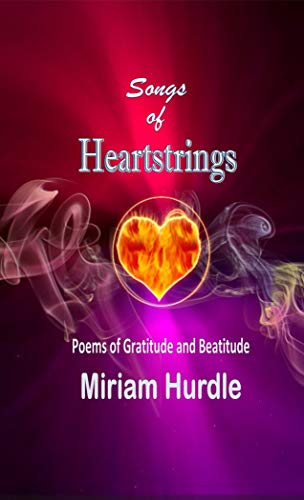 This week on Streets Ahead we’re promoting Miriam Hurdle’s collection of poetry ‘Songs of Heartstrings’:

Songs of Heartstrings depicts a road traveled with optimism, hope and appreciation amid heartache circumstances and an unpredictable cancer. It also celebrates true love and fulfilling relationships.

Miriam Hurdle in her poetry collection includes nine themes: Songs of Nature, Songs of Dissonance, Songs of Physical Healing, Songs of Marriage, Songs of Parenthood, Songs of Tribute, Songs of Reflections, Songs of Challenge, and Songs of Inspiration. Each of these themes covers various aspects of her life experience. Many poems are illustrated with her photos and watercolor paintings.

The poems in this collection are inspiring to the mind, heart and spirit. The readers will resonate with these experiences.

“A good poetry book that fans of the genre will surely appreciate.” – Readers’ Favorite

Songs of Heartstrings: Poems of Gratitude and Beatitude by Miriam Hurdle is a…

After less than 72 hours of Free promotion on Amazon, my new poetry book “Songs of Heartstrings” is currently #4 on the Top 100 Best Sellers in Kindle eBooks.

I want to thank all my friends who have helped me to post my promotion on your blog, Facebook and Twitter. All your support is paid off. It is incredible to get #4 on the Best Seller. I still have two more days of promotion.