This week for Lens-Artists Photo Challenge, Patti invited us to look at the photos with wide angle images. The wide-angle view is perfect for capturing a broad vista like a landscape, seascape, or cityscape.

Well, I have a small camera and I haven’t made any investment on camera equipment. When taking photos of landscape, seascape, or cityscape, I take them at different angles to capture the wide views.

I included two sets of photos from my travel archives, one set from Spain and another set from Germany. In Spain, we arrived in Madrid and took the tour bus to Toledo, Seville, Granada, and Barcelona. In Germany, we arrived in Frankfurt and took a boat to Cologne. We took a high-speed train from Cologne to Berlin. Then we were on the tour bus from Berlin to Würzburg, Bavaria, Munich, and Schwangau.

Here are the highlights of our travel.

Teatro Real (Royal Theatre) is a major opera house in Madrid. Founded in 1818 and inaugurated on November 19,1850, it closed in 1925 and reopened in 1966. Beginning in 1988, it underwent major refurbishing and renovation works and finally reopened in 1997 with a capacity of 1,746 seats.

Toledo is known as the Imperial City because it was the primary venue of the court of Charles V, Holy Roman Emperor in Spain.

The City of Arts and Sciences is a cultural and architectural complex in the city of Valencia, Spain. It is the most important modern tourist destination in the city of Valencia and one of the 12 Treasures of Spain. It was designed by Santiago Calatrava and Félix Candela. The project began the first stages of construction in July 1996 and was inaugurated on April 16, 1998. The following structure L’Umbracle is an open structure enveloping a landscaped walk with plant species indigenous to Valencia

We took the high-speed train from Cologne to Berlin. At one point the train was going 220 mph.

The Berlin Wall, once known as ‘The Wall of Shame’ that separated the east and west Germany. In 1989, the wall finally came down. The 1,316 meter (4,317 feet) long remnant of The Berlin Wall was kept as a heritage protected landmark. The Wall was decorated by many international and German artists with graffiti and street art, expressing their hopes and reflecting their feelings on this momentous occasion.

The Würzburg Residence is a palace in Würzburg, Southern Germany. The Würzburg Residence was commissioned by the Prince-Bishop of Würzburg Johann Philipp Franz von Schönborn and his brother Friedrich Carl von Schönborn. It was built and decorated in the 18th century. The Residence was constructed between 1720 and 1744, decorated in the interior from 1740 to 1770 and landscaped with magnificent gardens from 1765 to 1780.

Bavarian Alps is a summarizing term for several mountain ranges of the Northern Limestone Alps in the Germany state of Bavaria. Like the Alps as a whole, the Bavarian Alps were heavily influenced by the last ice age. Depositions by the ice age rivers and glaciers left behind a gently rolling landscape in the Alpine Foreland with lakes and bogs.

Thank you for reading.

Have a Wonderful Week!

This week, Ann-Christine invited us to look at striped and checked images.

I started looking around the house both indoor and outdoor and noticed things I hadn’t noticed before. There is a striped area rug in front of the fireplace. There are horizontal blinds for the windows, vertical blinds for the patio door, and the striped fabrics on the couches. Going outside the patio, I could see the stripes of the patio cover and the beach chair.

I looked in the closet next. Twenty-five percent of my husband’s shirts have stripes or plaid. I think it’s true in general that most of the men wear stripes or plaid dressed shirts. On the contrary, I only have one pair of pants and one sweater with stripes, and one plaid sweater. If my office had a stripe and check day in the summer, I would have to buy a new top.

When I investigated the archives, there are several of my favorite images have stripes and checks on the indoor structures, outdoor structures as well as in the nature.

What interesting stripes and checks do you see around your home?

This week for Lens-Artists Photo Challenge #121, Patti shared “some helpful techniques from the experts that can help us create images that lead our viewers to our subject.”

Using Lines and repeated patterns to bring focus to the subject

At Valencia, Spain, we visited Hemisferic which is a splendid Laserium, Planetarium, and IMAX cinema (over 900 square meters of the screen). It is in the City of Arts and Sciences complex. The building was designed by Santiago Calatrava. The lines and repeated patterns draw the viewers’ attention to the shape of the eyes (one eye opened, one eye shut).

The tour bus arrived at a large parking lot. We entered a 124 m (407 ft) tunnel which leads to an ornate elevator that ascends the final 124 m (407 ft) to the building of Eagle’s Nest in Germany. The lines on the wall and the lights point to the elevator at the end of the tunnel.

Using colors and contrast to draw attention to the subject

The contrast light color of the flower and dark green background bring the attention to the single yellow Daffodil.

Using arches and doorways to frame the image

This is the St. Johns Bridge in Portland, Oregon. The bridge has a 1,207-foot (368 m) center span and a total length of 2,067 feet (630 m). The arches of the bridge towers framed the Gothic cathedral-like image. The adjacent park and neighborhood of Cathedral Park are named after this appearance.

Using freezing the moment to capture the subject

Hummingbirds flap the wings more than 60 times a second. I had fun freezing the moment of the hummingbird flapping the wings. My baby Ruby Throated hummingbird was in a “standing” still position.

Using the eyes to draw attention to the subject

I had fun finding the eyes of the animals for you to fall in love with them. The cat in the neighborhood, the deer, and the monkeys in Nara and Kyoto, Japan.

Lens-Artists Photo Challenge #59 – Angles. This week, Ann-Christine invites us to look at the world from different angles and interpret what we see. I found a few quotes and a few sets of photos. The quotes may not refer to any photos so I do not link them together.

“The first impression of a new subject is not necessary the best. Seen from a different angle or under different condition it might look even better. Always study a three-dimensional subject with one eye closed” – Andreas Feininger

“Dream delivers us to dream, and there is no end to illusion. Life is like a train of moods like a string of beads, and, as we pass through them, they prove to be many-colored lenses which paint the world their own hue…” ― Ralph Waldo Emerson

“One moment the world is as it is. The next, it is something entirely different. Something it has never been before.” ― Anne Rice, Pandora

The buildings in the City of Arts and Sciences in Valencia, Spain include Valencia Opera House, Hemisferic, Prince Felipe Museum of Science, Oceanografic, and Agora. They were designed by Santiago Calatrava. The photos included are the two views of Hemisferic which is a splendid Laserium, Planetarium and IMAX cinema. 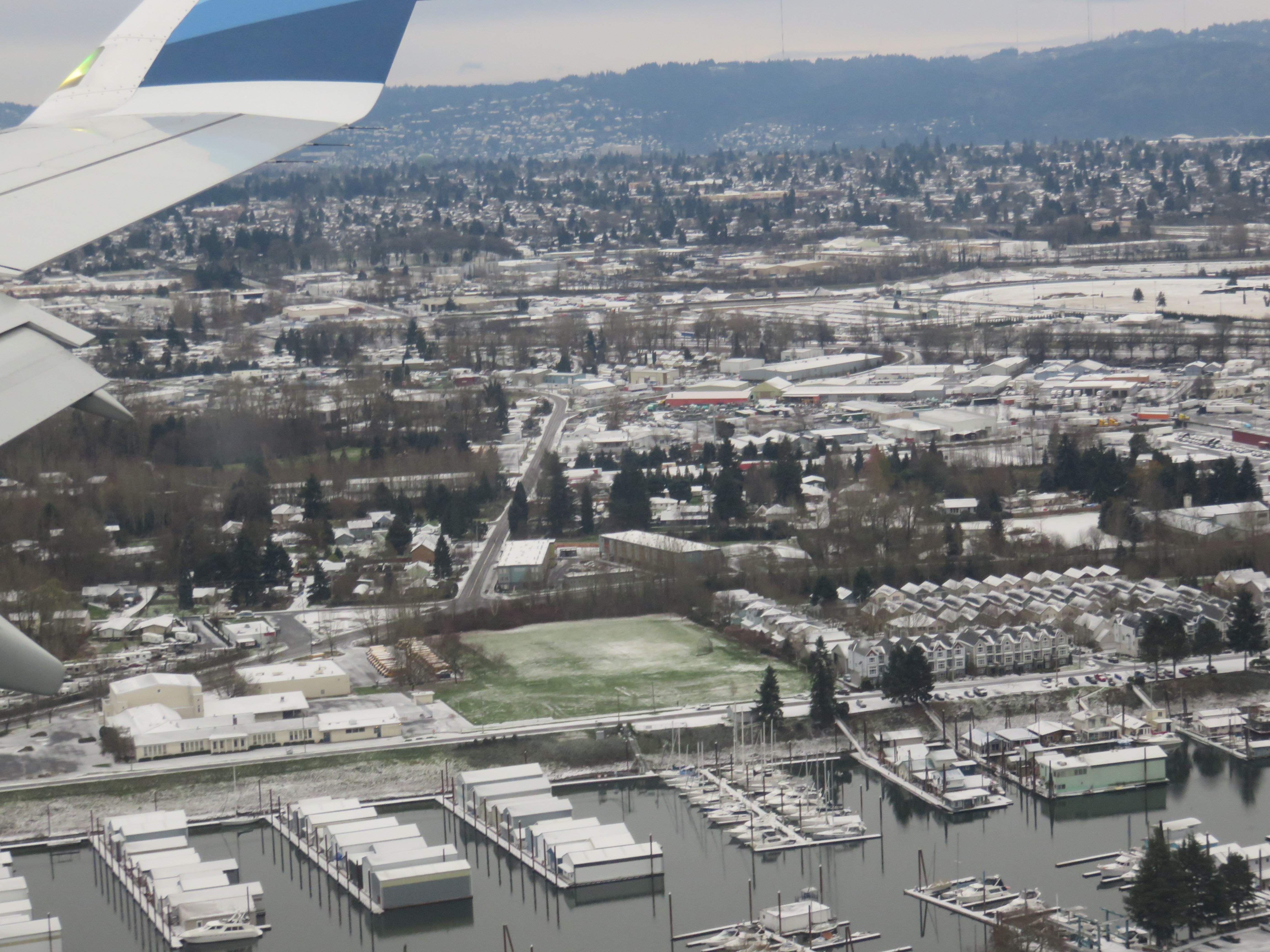 Whenever weather allows, my camera is ready to take photos from the airplane. It was snowing on this day before Christmas. Portland, Oregon doesn’t have heavy snow and I was happy to get a bird eye view and a close to the ground view of the somewhat snowy landscape. 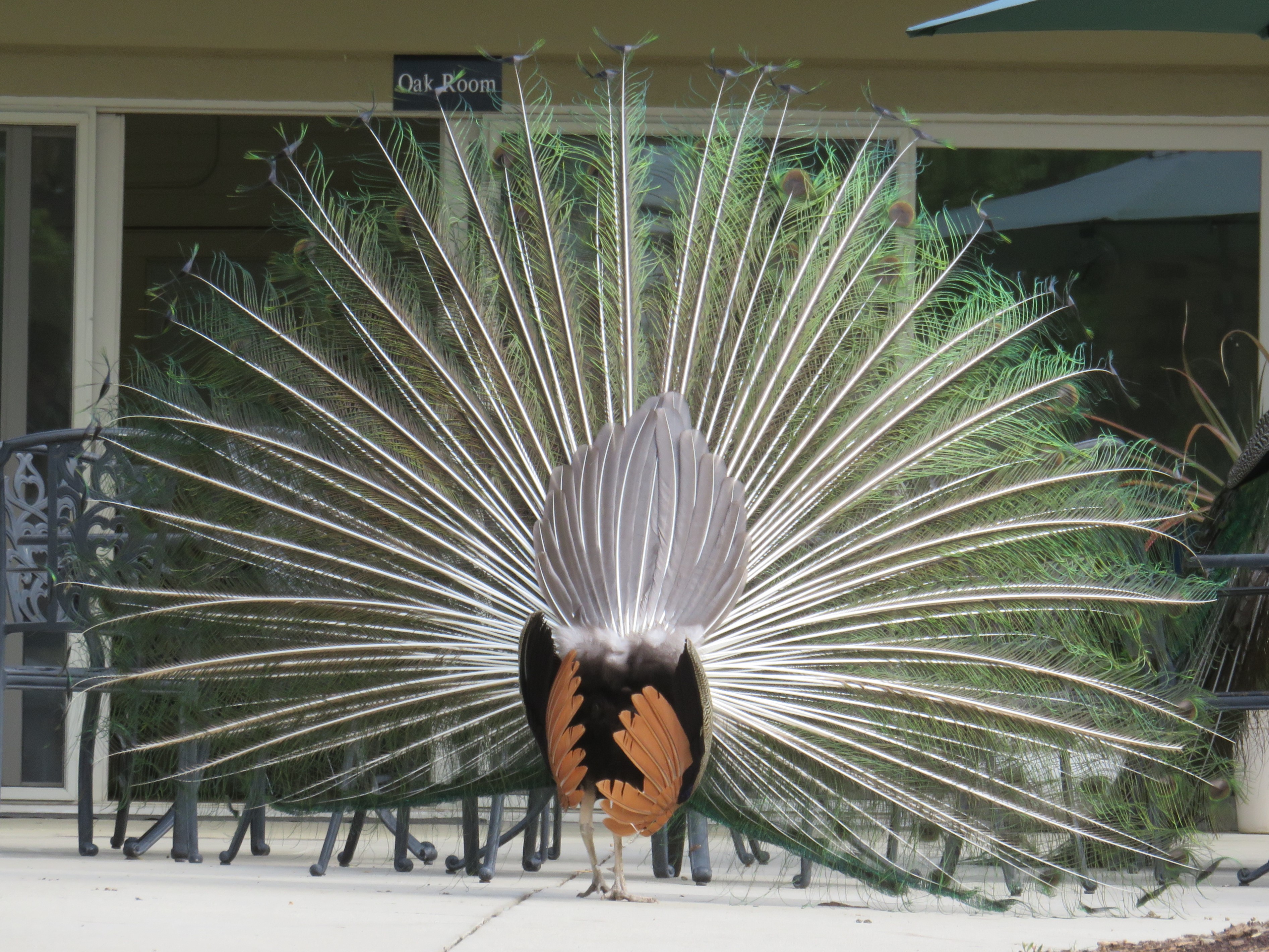 Every time I look at these photos of the peacock, I was glad my camera snapped them. It was not too often I could have a behind the scene view of the peacock.

We took a vacation in Spain, one thing impressed me the most was the architecture. Whether it was during the occupancy of the Roman Empire or Islamic Conquer to the contemporary design, patterns are easily observed. Here are a few of them.