Lens-Artists Photo Challenge starts this week. The theme is Wonder. Please see guidelines below for participation.

On May 18, 1980, Mt. St. Helens in Washington, United State erupted. It was a major eruption among the 48 states since 1915. I was a student in Seattle when the eruption occurred. The news showed the heavy ashes covered a nearby city. It was 3:00 p.m. but the blackened sky made it as if it was evening. Twenty years after, I went on a bus tour to visit when the mud and debris still filled the river.

On September 10, 2016, my daughter, her husband and I went back to visit. I zoomed in the top of the volcano, the crater was very much alive. The bottom of the mountain showed a lot of green. We found some beautiful flowers. It is the wonder of life.

The theme for this week’s Lens-Artists Photo Challenge is Wonder.  We invite you to create a post that captures a moment, a feeling, a place, a person—which filled you with wonder.

Here are the guidelines:

Week 2 – Ann-Christine aka Leya of https://lagottocattleya.wordpress.com/

Ann-Christine will post the next challenge on Saturday, July 14.

If you missed our initial challenge announcement, click here for the details.

Haleakalā or the East Maui Volcano, is a massive shield volcano that forms more than 75% of Maui. The western 25% of the island is formed by another volcano, Mauna Kahalawai, also referred to as the Western Maui Mountain. The tallest peak of Haleakalā (“house of the sun”), at 10,023 feet (3,055 m), is Puʻu ʻUlaʻula (Red Hill). From the summit one looks down into a massive depression some 11.25 km (7 mi) across, 3.2 km (2 mi) wide, and nearly 800 m (2,600 ft) deep. The surrounding walls are steep and the interior mostly barren-looking with a scattering of volcanic cones.  https://en.wikipedia.org/wiki/Haleakal

We drove to the summit of Haleakalā. The drive was pleasant on this cloudy day. The heavy clouds drifted over the island casting shadow in the ocean and on the beaches. We visited the crater and the volcanic area. There was a “hill” made of lava rocks, and a path was made for people like me who walked to the top and say “hi” to you! I’m now looking at the scale of the hill and me. 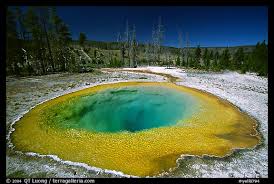 The Yellowstone Caldera (a collapse is triggered by the emptying of the magma chamber below the volcano) is the largest volcanic system in North America. It has been termed a “supervolcano” because the caldera was formed by exceptionally large explosive eruptions.

The most violent known eruption occurred 2.1 million years ago. A smaller eruption happened 1.3 million years ago. The current caldera was created by an eruption that occurred 640,000 years ago. Each of the three climactic eruptions released vast amounts of ash that blanketed much of central North America, falling many hundreds of miles away.

Since the last supereruption, a series of smaller eruptive cycles between 640,000 and 70,000 years ago has nearly filled in the Yellowstone Caldera with 80 different eruptions. Layered lavas were formed with each eruption. The volcanic activity is much alive as manifested by the hotspots below the Crust of the Earth.

Destruction of land and plants

Kiwinana at Ramblings of a Writer:

“For this week’s challenge, explore the classical elements of earth, air, water, and fire. How do you capture something invisible like air or the movement of water?” – ERICA V.

No place is like Yellowstone National Park that includes all the elements on this planet we call home. Its vast land covers mountains and flat land, waterfall, and volcano.

“Yellowstone National Park spans an area of 3,468.4 square miles (8,983 km2), comprising lakes, canyons, rivers and mountain ranges. Yellowstone Lake is one of the largest high-elevation lakes in North America and is centered over the Yellowstone Caldera, the largest supervolcano on the continent. The Caldera is considered an active volcano. It has erupted with tremendous force several times in the last two million years. Half of the world’s geothermal features are in Yellowstone, fueled by this ongoing volcanism. Lava flows and rocks from volcanic eruptions cover most of the land area of Yellowstone. The park is the centerpiece of the Greater Yellowstone Ecosystem, the largest remaining nearly-intact ecosystem in the Earth’s northern temperate zone. The vast forests and grasslands also include unique species of plants.”

The Earth Is a Mystery

Earth is the third planet from the sun and the fifth largest in the solar system. The earth is a big mystery. It is the only planet that has oxygen, gravity, and constant movement. The Earth consists of four concentric layers: inner core, outer core, mantle and crust. The crust is made up of tectonic plates, which are in constant motion. Earthquakes and volcanoes are most likely to occur at plate boundaries. The crust is the land and ocean where we live.

One of the best places to observe the volcanic activities is Yellowstone National Park.

Yellowstone National Park spans an area of 3,468.4 square miles (8,983 sq. km), comprising lakes, canyons, rivers and mountain ranges. Mostly in Wyoming, the park spreads into parts of Montana and Idaho. Yellowstone Lake is one of the largest high-elevation lakes in North America and is centered over the Yellowstone Caldera, the largest supervolcano on the continent. The Caldera is considered an active volcano. It has erupted with tremendous force several times in the last two million years. Half of the world’s geothermal features are in Yellowstone, fueled by this ongoing volcanism. Lava flows and rocks from volcanic eruptions cover most of the land area of Yellowstone. Yellowstone features dramatic canyons, alpine rivers, lush forests, hot springs and gushing geysers, including its most famous, Old Faithful. The park is the centerpiece of the Greater Yellowstone Ecosystem, the largest remaining nearly-intact ecosystem in the Earth’s northern temperate zone.